Kringle of course!  Well, not really, at least not in the early days.  As the Vikings’ everyday activities included exploring unknown lands and sailing the open waters, it’s no surprise that they consumed hearty meals with meat, dairy, grains, fruit and vegetables to maintain their energy.  In fact, during the Middle Ages, even a poor Viking had a diet that was considerably better than that of an English peasant.  The Vikings often ate what they could grow on farms, hunt, or gather, giving them a well-balanced diet to supplement their active lifestyle.

Kringle, Cakes, Coffee Cakes, and more Kringle right?  Probably the closest thing that we do today is embrace how the Vikings used the best ingredients that were most abundant to them.  Traditional Viking food includes meat, along with seasonal vegetables and fruit, dairy products and bread that they made from a variety of crops.  Due to living through harsh winters where fresh food was hard to come by, Vikings resorted to pickling vegetables and fruit and curing meat to ensure that they had enough food to last during the cold months.

Since many Scandinavians lived on the coast, various types of fish such as herring, salmon and trout were a regular addition to Viking meals.  Almost everyone in the Viking community from kings to common sailors ate meat every day which is why they raised animals such as cows, sheep, goats, chickens, ducks and horses on their farms.  Pork was also a popular meat choice as pigs were easy to raise and matured quickly.  As avid hunters, Vikings would also capture reindeer, elk and bear to eat.  These ingredients are still popular today with smørrebrød, or famous Danish open faced sandwiches.

While you may think that a fire pit was the method of choice for cooking meat, Vikings preferred to boil their food.  When the meat and vegetables were cooked and taken out of the pot, they would add fresh trimmings to the meat stew, called skause, making it more concentrated.  Every year, our family still attempts to visit the local Danish brotherhood in Kenosha, Wisconsin and participate in the Torsk dinner.  Torsk refers to a broiled and buttered cod fillet with a side of boiled potatoes and in this case a mustard gravy.  It’s usually served with a shot of aquavit, a fiery distilled spirit that often has a distinct caraway flavoring.

Vikings both farmed and foraged for their fruits and vegetables, enjoying a selection of seasonal produce.  Their fruits and vegetables were more of the wild variety rather than what we see today and included carrots, cabbage, beans, peas, herbs and spices, which would add flavor to their skause.  Their farming skills extended to orchards, so Norse food also included apples, pears and cherries.  Taking the opportunity to gather in the summer season, Norsemen also consumed wild berries such as lingonberries, strawberries, bilberries and sloe-berries.  Today, we still employ this same spirit by selecting our fruits, using wild blueberries from Maine & Nova Scotia and fresh from the bog, local cranberries as the star ingredients in our bakery.

Most meals included basic flatbread made from a variety of different crops that the Vikings grew.  The Northern climate was excellent for growing barley, rye and oats so these grains were a staple in the Norse diet.  While farmers would sow seed in the spring and harvest their crop in the late summer or fall, Vikings would also forage for grain such as bark-birch, which was very nutritious when dried and ground.

If a cow wasn’t used for its meat, then it was most likely a very good producer of milk.  The Vikings would drink milk, whey, buttermilk or use the dairy product to make cheese, butter, and curds to eat.  They also raised chickens for their eggs.

Vikings are well known for drinking copious amounts of ale every day, although the type of beer they drank had a relatively low alcohol content.  They also took beer on their Viking ships as the fermentation and brewing process meant their drink stayed fresh longer than water.  Mead and imported wines were more of a special occasion drink that was saved and consumed at feasts.

A Viking family would typically eat two meals per day.  Dagmal was the morning meal in which the adults would eat leftover stew from the night before with bread and fruit.  The children would usually have porridge and dried fruit or on occasion, buttermilk and bread.  A Viking dinner or evening meal was called Nattmal, which they would have at the end of their working day.  This meal consisted of meat with stewed vegetables accompanied by an ale drink. 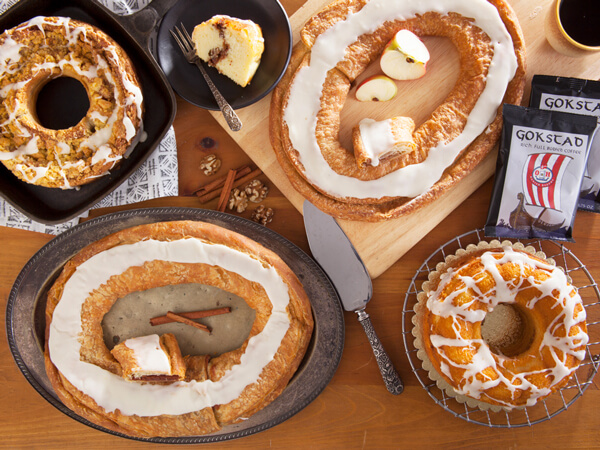 The thing that made a Viking feast different from a typical meal was the fact the women would cook the meats, vegetables and bread over an open fire in the middle of a hall.  While the food was the same, its preparation and large quantities ensured a feast was a special occasion.  A feast was also a time where they would drink mead, a strong fermented drink made from honey.  These days, let us handle the work.  You can order some of the best selling bakery gift packages and we will do the preparation and deliver fresh to your door.  At least we’ll have the dessert covered!

Just as Vikings traveled the seas in search of new land, we scour the world hunting out the finest ingredients to add to our extensive selection of pastries, cakes and slices.  So whether you want to eat like a Viking or eat as much as a Viking, we’ll always have your bakery and dessert covered.  You can easily order our mouthwatering treats online and enjoy the convenience of having them delivered to your door!  Reach out to our friendly staff with any questions.

Your request could not be completed at this time, please try again.